I found a tribute to Steve Brake on the net,to read it click Here.
The tribute contains the only photo of Steve that I could find, so If
you have a better photo let me have it and I will include it on here.

If there are some I have forgotten then let me

Know and I will add them.

The Memorial Service for Robin Griffin took place in the Chapel on Saturday 1st March 2014. It was organised by Audrey and Mark Griffin and was attended by about eighty, some of whom had met Robin in his school teaching years - either before or after his time on the staff of the College. Former Culham Music Lecturer, the Reverend Ron Burrrow conducted the Service. He was assisted by fellow Culham Music Lecturer, Breyan Knowles, who helped to organise the religious elements of the service as well as playing the organ.

The Reflections included four from Culhamites.

Geography lecturer, John Enticott read "To begin at the beginning" from "Under Milk Wood".

Other reflections were made by a former pupil of Robin's at Shoreditch School and from four former pupils of the European School.

Nick Storr, another former pupil of the European School treated us to the prelude to Bach's Second Cello Suite.

Refreshments were provided by ex-Culhamites and the European School.

I received this message from Robin’s son Mark some time ago but forgot to include it on here.

Sorry for a delay in responding I'm a very irregular user of facebook. Yes sadly Robin (my Dad) died in October 2013. He'd been ill for about a year by that point. My Mum and I were with him and it was as peaceful as possible. He received palliative care in the last few weeks and so died in the Oxfordshire village he moved to after leaving Shoreditch in the mid sixties. He did long enough to meet his grand daughter Dora who was born earlier that year... and (although of course I've very biased) seems to have inherited some of his humour and sociability. Thanks for being in touch. Best Wishes. Mark. 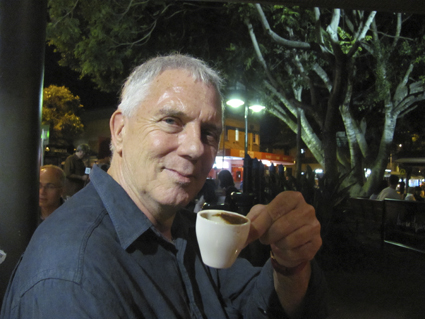 I have recently been contacted by Anna Fairly who was the partner of Douglas Linnett (Leonard).
Who was one of the Hoxton Café workers back in the 60’s.
I was saddened to her of his death back in 2011 in Brisbane Australia where he lived.
Anna told me she had a couple of committee documents that she would like to be kept for
the history of the café. One was by Doug the other was by Hyla Holden. I have scanned them and
published them on this website. Doug’s one is on this page whereas Hyla’s long winded one will be on his page.

There is a great Obituary for Doug (who was known as Doug Leonard) in Realtime Magazine, which can be read here, https://www.realtime.org.au/obituary-douglas-leonard/.

If you have any memories of Doug please let us know. 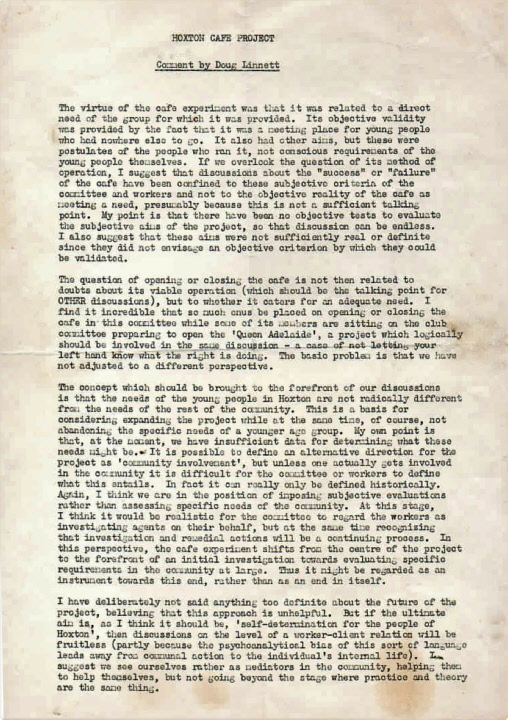